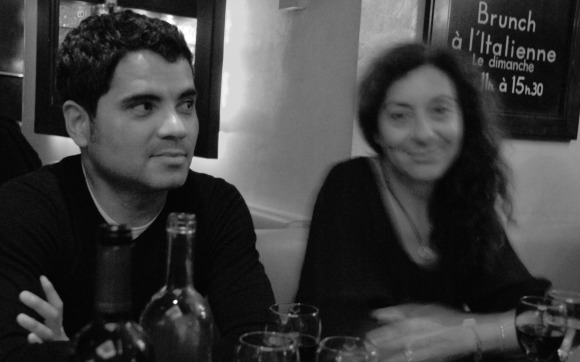 One of the blessings of my 35-year career as a journalist and media manager was recruiting, hiring, promoting and mentoring some very special people.

There are hundreds of stories that bring smiles as I look back. Stories about demanding editors who mentored me, visionary peers adjusting to a changing media world, young reporters and photographers learning their craft. Journalists with dreams and aspirations working hard to make a difference. I don’t look back often these days. But when I do, I relish the moments, the stories.

Perhaps the most special story, looking back: That of Manuel Rivera-Ortiz, whom I hired as a young writer and photographer in Rochester in the late 1990s. It was great to catch up with him last week in Paris. I’m honored to be on the advisory board of his Manuel Rivera-Ortiz Foundation for Documentary Photography and Film.

Meetings were held in typical Parisian settings, good restaurants and the swank Traveller’s Club on Champs-Elysees. Manuel, pictured here with Paris photojournalist Scarlett Coten, is a profoundly humble soul and it was a bit odd to reunite in such a setting. But in the new world in which he resides, that’s where the meetings need to be, for him to get his job done in the world.

A new world would be an understatement, knowing Manuel’s story. But in a way it’s the same world, always. He has been there, done
that, and continues to do more in big ways.

We met in the late 1990s, Manuel was a 20-something, bright and boundlessly enthusiastic about writing and photography. Editors in Rochester, considered the international capital of photography, gave him a chance to show what he could do. He was hungry to learn, he was ready to do.

What impressed us all about Manuel was his can-do spirit: “You need a job to be done? I will do it.”

He did any job, with gusto, on every assignment big and small. And the job was never easy for him.

Manuel grew up in a barrio on the Caribbean coast of Puerto Rico. The oldest of 10 children, he grew up in a corrugated tin shack with dirt floors and no running water. His father hand-chopped sugar cane in the fields of his homeland and labored as a migrant worker in The United States, eventually settling in Rochester.
During those travels, Rivera-Ortiz attended school as part of the Massachusetts Migrant Education summer program, where he was offered his first courses in photography. In Rochester, even though Spanish is his first language, Rivera-Ortiz graduated from East High School, with honors. He went on to earn a B.A. in English from Nazareth College and a master’s degree from Columbia University in New York.

We’ve kept in touch and it was wonderful to follow his career as he went on to become an internationally renowned photojournalist. His web site shows images of mine workers in Bolivia, the “Dalit” untouchable caste in India, slums in Cuba and much more, from Kenya to Turkey to Thailand. His work focuses not on sensational, war-and-famine images but on the realities of everyday life in an underprivileged world.
“The irony about my photography is that making these pictures constantly reminds me of my past.” Rivera-Ortiz says. “But life continues without regard for my own struggles growing up. It is for this reason that today I make these pictures to lend the voice I have been given to those who like me then, are still living in poverty today.”

Rivera-Ortiz was highly motivated to learn back in those early days in Rochester. Now, he’s a motivator and mentor, helping young photographers with funding and guidance with team of internationally acclaimed friends.

He remains today humble, grateful, eager to learn and boundlessly energetic person who wants to make a difference in his world.
I am blessed to have known him then, and now.

And very, very proud to see where Manuel has come from in those days and what he is doing now for the next generation of photojournalists. And that he has not forgotten where he came from and the job that needs to be done.

We joked at that Paris café last week, that I am now not a mentor, but as my friend Manuel carries on in his work with young photojournalists, I am a “grand-mentor.”

That, looking back, means all.