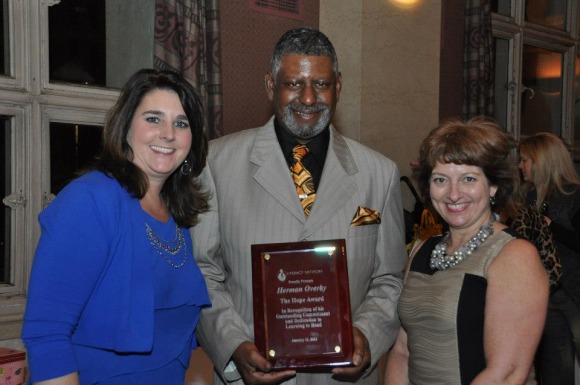 In the words of nonprofit communications expert Lori Jacobwith: “No numbers without stories, no stories without numbers.”

Donors and supporters look for measurable “outcomes” — the scale of the mission and the impact an organization may be making. The Literacy Network has a good story to tell on the numbers side. It recently hosted its second annual Handbags for Hope fundraiser. The sold-out event raised $30,000 to benefit the various programs that serve 288,000 children and adults in need of basic literacy skills in Greater Cincinnati. The network has 1,000 volunteer tutors working at 34 schools, as well as five adult basic reading classes. It has a great story to tell, just in those numbers.

But the most touching – and important – moment of the night was when the 2013 Hope Award was presented to Herman Overby, pictured here with The Literacy Network’s executive director Kathy Ciarla and instructor/volunteer Meg Muething. He’s a humble man whose life has been a difficult road to that night at the swank Cincinnati Club. He walked to the microphone before a crowd of 300 with gently greying hair, crisp black shirt and bright yellow tie and handkerchief tucked neatly in the pocket of a grey suit. He appeared a picture of dignity, pride and success. In few words, he told the crowd about the work he put into learning to read, in his 60s, and how The Literacy Network volunteers were there to guide him.

Those simple words are all I recall from that night.

After Herman’s words, the event returned to the world of handbags, cruises, cupcakes, hotel stays, and spirited bidding. Humanitarians need to have a bit of fun, too.

But without Herman’s words, the night would have been just fun and a few numbers.

No one attending should forget the face representing the Literacy Network’s work and his simple words that stopped the show.

Herman reminded all why they were there, the difference they made in his life.

And the lives of 15 grandchildren going forward.

Final numbers: The adult reading program served 50 adults in 2012, Herman included. Another class will start in the Spring. It has a waiting list of 30 students. Volunteers are always needed. The network offers tutor training the first Tuesday of each month. You can sign up at www.lgnc.org or by calling (513) 621-READ.

Each of those 30 waiting has a story waiting to be told. They just need a little help putting it into words.