Never Too Early, Never Too Late To Make A Difference In Reading Skills, Literacy 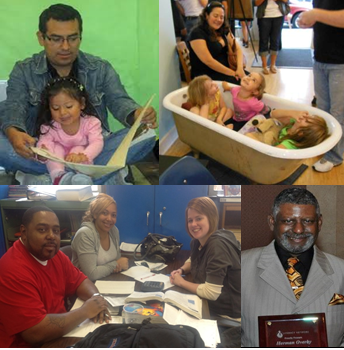 Faces of learning at all ages

Last week I posted about Read Aloud 15 Minutes, a nonprofit organization that promotes reading aloud every day for at least 15 minutes from birth. Read Aloud is a national campaign and local outreach that is trying to shift the national norm by focusing on parents as our first and most important teacher.

So when you ask, “How can I get involved in promoting literacy and reading skills?” the answer starts right in your home.  You don’t have to – and shouldn’t – leave your couch.

Indeed, reading skills should start in homes, early and often. From birth to age three are critical years for the development of language skills that are the foundation to future learning success.

But there are plenty of opportunities to get involved at all ages and needs — as a supporter, donor, occasional volunteer or tutor. It’s never too late to learn and no bad time to get involved.  Work at every level is important and brings rich rewards.

Forgive the personal indulgence, but I can best report on this important issue in the context of my own journey of the past few years.  Getting involved with early childhood learning brings my experience with literacy work full circle .

I knew I would need an interest as I approached retirement in 2010 after 35 years as a writer and editor. Golf was not it.  So I became a certified tutor of children and speakers of other languages to help others improve reading skills, in some cases simply start them.

One of my first students assigned by The Literacy Network of Greater Cincinnati was a young mother of two who had been through the drug scene, domestic violence and homelessness, unless you consider an automobile a home. But she was determined to a better life for her and her young daughter. After weeks of lessons, she raised her reading level from a grade 4 to 6 and improved her school work considerably.

That may not seem like a great accomplishment to some. But studies have shown the 6th level is an important plateau. That’s a level at which every day life issues such as bus schedules and job interview forms become manageable. It’s an important step away from the alternative – a life limited by the inability to keep up in school, keep pace in the workplace. The Literacy Network estimates 288,000 people in Greater Cincinnati are in need of basic literacy skills.

If I made a difference in one of those lives, it was an important start and I wanted to do more.

I ended up joining the boards of  The Ohio Literacy Network and then The Literacy Network in hopes of making a difference on a larger, systemic scale. While I enjoy that board level involvement,  the work across the table with that one student was most rewarding.

The journey continues: I was invited to serve on the board of Wordplay Cincy, which provides children after-school programs in creative writing, reading and project-based learning that encourages self-expression.  As a board member, I felt obliged to show up and at least witness what was going on at Wordplay’s first project last summer at Northside’s Chase Elementary School,  part of Cincinnati Public School’s Fifth Quarter program.

There were 70 students in need, served by Wordplay Executive Director Libby Hunter and a few other volunteers who showed up on occasion to help out.  But with such great need, so many children eager to engage, how could I not return each day?  I did, all summer.  Small victories were immediate. Seeing some of the students again these days at Wordplay: The program has had a profound influence.

Wordplay is all about creativity, allowing minds to wander and wonder. The Wordplay and Literacy Network programs complement one another well and collaborate in many ways.

“We do social-emotional learning and that’s what we need to focus on in terms of measures, Hunter said. “It’s critical to forming bonds with the kids and giving them a sense of stability and security so they CAN learn — modeling emotional intelligence and mindfulness, all sorts of crucial social lessons that are almost essential for fostering any real learning.”

As Wordplay enters its second year, it’s great to stop by and see its “reading tubs,” (gently-used bathtubs lined with pillows) filled with children reading for the sheer joy of it.  They read and write about traveling to far-away places on rocket ships, playing with penguins in Antarctica and swimming with mermaids. They are learning and finding it fun.

Since its September opening, Wordplay has worked with over 400 children, trained over 130 tutors and supported five schools in a community-wide effort to build literacy skills.

Libby Hunter and her Wordplay team have made a difference.

I have not been as active as I had been in any of the above as I launch Charitable Words Scholars, which finds and funds internships connecting nonprofits with students interested in humanitarian work.

Eighteen scholars will be assigned this year.  And as Charitable Words achieves 501c3 nonprofit status this summer or fall, I hope there will be dozens more in 2014 and beyond.  The scholars have been assigned to a variety of missions in Greater Cincinnati and around the globe – music therapy for special needs students; art projects with dementia patients; sustainable, healthy growing projects; clean water in Nicaragua; education in Tanzania and more.  The Charitable Words Scholars are making a difference in many ways, many places.

But with literacy so close to my heart, it  was simply fantastic to hear from Charitable Words Scholar Sarah Jernigan talk about her experience at the East End Adult Education Center, which offers preparation tutoring for General Education Development (GED) testing for high school diploma equivalency credentials.

She reported that several of the students she was working with advanced two and three reading levels, including the magic number of level six.  Ten of them passed their GEDs recently. That will change their lives — at least give them a better chance — for the better.

Sarah is a humble person and is reluctant to take credit for her role in the center’s successes. But I was there on site one day to see how she connected with her students.

Sarah made a difference.

One of the most touching stories I have seen was told at the Literacy Network’s Handbags for Hope fundraiser in January. The sold-out event raised $30,000 to benefit its programs. The network has 1,000 volunteer tutors working at 34 schools, as well as five adult basic reading classes. It has a great story to tell, just in those numbers.

But the most touching – and important – moment of the night was when the 2013 Hope Award was presented to Herman Overby, pictured above. He’s a humble man whose life has been a difficult road to that night at the swank Cincinnati Club. He walked to the microphone before a crowd of 300 with gently greying hair, crisp black shirt and bright yellow tie and handkerchief tucked neatly in the pocket of a grey suit. He appeared a picture of dignity, pride and success. In few words, he told the crowd about the work he put into learning to read, in his 60s, and how The Literacy Network volunteers were there to guide him.

Herman’s story shows it’s never to late to learn.  Read Aloud’s message is that it is never too early to start.  And the East End and Wordplay projects are representative of the work to be done in between, at all ages.

Please check out any or all of the literacy and reading web sites linked in this post. Support, volunteer or give.

You can make a difference.