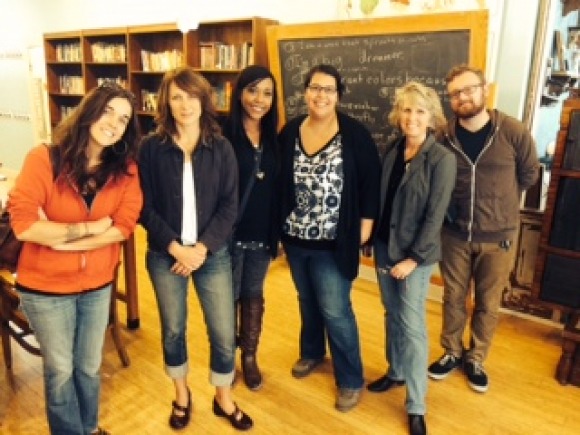 The multimedia project will document students as they prepare for the “Louder Than a Bomb (LTAB)” youth poetry slam, coming to Cincinnati for the 2014-15 school year.

WordPlay is working alongside The Taft Research Center at the University of Cincinnati and Elementz to manage 14 high school teams for the big event. WordPlay’s 6 LTAB teams will meet weekly after-school practices, which began October 9.  Semi-finals will be held this coming March, closely followed by the finals, which will be held at the Underground Railroad Freedom Center in April, which is National Poetry Month, said Wordplay executive director Libby Hunter.

This year LTAB is aiming to have 14 schools participate in the competition, and is expecting roughly 400 youth  ages 13-19 to participate. So far Wordplay has secured the participation of six teams, including 2 from dePaul Christo Rey, 2 from Aiken, 1 from Seven Hills and one city-wide team hosted at WordPlay for students not attending a high school with a team.

The competition will have two separate parts – an individual competition and a team competition. The teams will consist of four to eight students and two alternates.

As part of preparing for the festival, WordPlay will initiate an after-school program for the schools involved, which will be taught by their LTAB Coordinator and teaching artist Desirae Hosley. Hosley goes by the name Silent Poet and has been a spoken word artist for 10 years.  She’s involved in many slam poetry societies and even managed the Poetry Slam Team for the University of Cincinnati SlamCats in 2008.  She’s also been involved with AmeriCorps since 2009.

WordPlay will host bi-monthly events leading up to the semi-finals and finals where the various LTAB teams will come together  to get to know each other and hone their skills, Hunter said.  “This would be in the form of an open mic night, giving the students a chance to test their skills in front of the microphone.  Most importantly, it’s a way for the students to come to know each other in the months leading up to the competition.

LTAB was founded to be a public forum for disenfranchised teens to find the power of their own voice and form bridges across social divides, and Hunter says that those goals are very closely aligned with that of WordPlay Cincy.

“I think LTAB Cincinnati has tremendous potential to bring out youth together at a time when they have experienced a great deal of trauma—gun violence, gang activity, rising childhood poverty rates, you name it,” Hunter said.

“Giving our teens common ground to learn about each other, embrace differences, dissipate stereotypes, and move forward into their lives as young adults with a stronger sense of acceptance and a more opened mind is one of the most important things we can possibly do.”

Hunter said that WordPlay is looking forward to making LTAB an ongoing experience in Cincinnati, and will continue to grow their after-school spoken word program and help build a sense of community among students who wouldn’t normally have the chance to interact.

NKU instructors Sara Drabik and Michele Day will be the advisors of the project, which will provide funding and valuable learning experience for the NKU College of Informatics students.

An Assistant Professor in Electronic Media & Broadcasting and Director of NorseMedia, NKU’s cable television station, Drabik has a background in teaching, production and media activism. She works with NKU students to help tell the stories of our communities, both locally and nationally, from as close as Over the Rhine to as far as Edinburgh, Scotland and Port Elizabeth, South Africa.

Day teaches newswriting and reporting classes and advises Student Media at NKU. She worked for newspapers for more than 20 years, including 17 years as an editor and reporter for the Cincinnati and Kentucky Post.

“Through these projects, I hope the students got a better sense of community, environment and self,” Drabik said. “More importantly, I think they learn how related all three are to each other. And community doesn’t just mean NKU or their neighborhood. They are connected to everything around them, on both sides of the river and beyond. It affects them and they can affect it. Understanding that is vital to becoming an engaged and concerned citizen. By combining their filmmaking skills with service to others, they can have a decidedly positive impact on our communities.”

Charitable Words is seeking sponsors for the project to compensate students involved and help Wordplay with costs related to the program.

Please support this and other Charitable Words Scholars partnerships with local nonprofits by helping as a “producer of positive community impact.”

Your name, business or organization will be listed – with a prominent logo on our “Supporters” page and recognized in project-related and event materials, media releases and social media.

A thank you slide in credit rolls in videos or multimedia presentations done for our nonprofit partners to share with their audiences.

Contributing producers and friends will be recognized as well.

Any support needed, deeply appreciated and will be appropriately recognized.

Small donations quickly add up for collective impact, supporting special assignments and learning and development opportunities. A fifty dollar freelance assignment at a nonprofit event has meaning to a student.

Please note if you wish to support a specific nonprofit, college or cause and Charitable Words will do its best to ensure your support is designated as such.

Charitable Words is a 501(c)(3) nonprofit organization and governed by an independent board of directors.