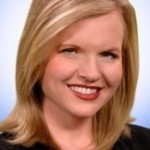 Charitable Words welcomes this guest post from Sara Celi, an anchor and reporter at Oklahoma City’s KFOR. The Cincinnati native was a reporter for WXIX Fox 19 from 2007-2011. and tells of encountering help from home as she was in the midst of covering the aftermath of the tornado that devastated much of Moore, OK, on May 22.

Sometimes, you just need to see someone from home.

That was me on Wednesday, May 22, day two of the fallout from the massive EF-5 tornado that struck Moore, OK. As a TV anchor and reporter at Oklahoma City’s  KFOR, I found myself weary and exhausted from the madness of the storm. Thirty minutes on Monday changed everything in the town I now called home. For the last few days, I had been at work almost nonstop from two days of 24 hour news coverage, and then from the pressing need to report as many stories as we could from a disaster that had spawned thousands. I’d wind up working almost 90 hours by the end of the week. 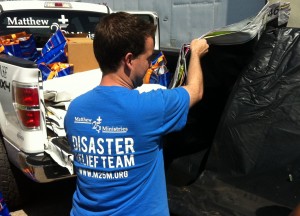 By Wednesday, I’d already put in 30.  At some point that morning, I realized Matthew 25 Ministries might be on the way to our area. Years of working as a journalist in Cincinnati had made me very familiar with that organization and their disaster relief efforts. Over time, I’d done my share of live shots for FOX19 about disaster preparedness and relief at the Matthew 25 headquarters. I’d just never seen them in action during a real disaster.

Little did I know what life planned for me. A couple of quick phone calls put me in touch with Matthew 25 CEO Tim Mettey (shown here on the scene), driving on I-35 and doing his best to navigate his truck to the devastated community of Moore. We’d only met once, right before the group left for Haiti.  I had to remind him of our previous connection — not that it bothered me that he didn’t remember.

It just felt good to hear another voice from Cincinnati.

We agreed to meet in the parking lot of the Warren Theater, which by then had become the main location for the legions of trucks, equipment, and people that this disaster attracted. From there, we followed Tim and another Matthew 25 volunteer as they drove through the worst of the tornado damage on the way to Hillsdale Free Will Baptist College. That small school in southern Moore would serve as Matthew 25 Ministry’s main staging area and drop off point for supplies.

When we stopped at a police checkpoint in the neighborhood around Plaza Towers Elementary, Tim got out of his truck and walked over to the one of KFOR’s SUV news units.

“There is more damage here and it went through more of a populated area than I have ever seen before,” said Tim to me, his face ashen and his eyes wide. “It is truly catastrophic.”

He said it was one of the worst things he had ever seen.

All around us stood what remained of a once vibrant neighborhood. Photos would never be able to explain it all. The storm ripped homes off their foundations, then blew the brick and wooden boards across town. It wiped away not one house, or ten, but hundreds. The wind pulled bark off trees, twisted their trunks, and sucked away landscaping like a vacuum on a dirty kitchen floor. Crumpled cars lay next to refrigerators in the middle of streets. A once crowded, urban neighborhood now had nothing to break up the horizon of the flat terrain.

“This is reality, and some of the people have suffered more than you could show on any video camera,” Tim told me once we arrived at Hillsdale.

His voice sounded a little broken, but he regained his composure. This is a man who takes action when humanity is at her worst. He doesn’t shatter.

Tim went to work with a few people from his team. They unloaded what he told me were the first of several semi-trucks full of bathroom cleaners, tarps, food, detergent, shampoo, conditioner, window washing solution, sponges, and more. Inside the nearby gym, other volunteers readied the space to receive the supplies.

“Anything you would use every day, we have and have brought here,” Tim said in between unloading pallets off the truck.

Matthew 25 volunteers had a systematic, methodical way of unpacking, and honestly the enormity of the supplies shocked me a little. Not only had Matthew 25 made it to Oklahoma with supplies in tow just two full days after the disaster, but they had enough items to stock a small Kroger. More and more just kept coming off the truck, all of it destined not for some faraway place, but for the people I called my neighbors. Here they were, in the community where I lived, doing their dead level best to help people who had lost everything after the scare of their lives.

How ironic. How much of my life had gone full circle. And how strange to find the intersection of everything in an Oklahoma parking lot.

By the time we returned to the gym Thursday morning, storm victims could come to the school’s gym to get supplies and help from Matthew 25 and partner organizations. Volunteers buzzed around the gym straightening tables and organizing supplies–including an enormous number of personal care kits straight from Procter & Gamble and a small mountain of Mr. Clean foam cleanser. No item had been forgotten. Even the famous meals-ready-to-eat developed by Matthew 25 made an appearance.

Right after he said it, he shook his head, as if sweeping the enormity of that from his mind. Then he turned his attention back to the immediate ways he could help the people affected by the tornado. He had pressing work to do.

A short time later, my photographer and I returned with Tim to the neighborhood around Plaza Towers. So many storm victims lost their cars right along with their homes, so Tim and several volunteers from his group decided to hand deliver what they could to the people who need it most. We told him we’d go along as the group passed out tarps, bleach, hammers, gloves, and more. If nothing else, it would make for yet another story we could share with the world.

Do you know what they found on that walk through the neighborhood?

Oklahomans who were reluctant to take anything.

“What they keep saying is that they don’t want to take something that they think might be of use to someone else, someone that might need it more than them, even though they have lost everything,” Tim said as we stood in the middle of what had been a bustling neighborhood street just three days earlier. Debris, garbage, tree branches, and twisted cars littered the street.

“Wow,” he added. “Everything these people have been though—they are still humble.”

A sad, half smile stretched across his face.

“People say Oklahomans are tough,” I told him.

Then his face changed again and I saw something else. I think it was peace.

At that moment, I believe I understood Tim Mettey better than I ever thought I would. I decided he does this work with Matthew 25 not just because it helps other people. He does it because somehow, in the middle of the worst, saddest moments, this kind of work allows him to see the strength, perseverance, and good in other people. He might say this work helps him see God every day. I think it also helps him see just how interconnected we all really are–and how one steadfast spirit can impact another.

Yes, his team goes all over the world helping people, and more than 11 million people have their lives touched by M25M each year. In Cincinnati, they get a lot of attention for the work they they do and the action they take. But  it’s not just about the things Matthew 25 volunteers do to change the lives of others.

What also counts is how others change them.

Thank you, Sara, for these Charitable Words.

And best wishes from your many friends here in Cincinnati.