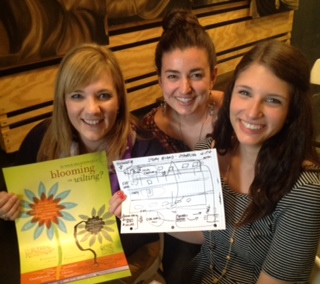 Arizona State University students will partner with The Purple Ribbon Council on a puppet performance and video to educate school children and raise public awareness about bullying, date and domestic violence.

The students will be assigned internships with Charitable Words, a nonprofit that connects nonprofits with students, volunteer professional advisors and connections to pro bono resources to help “shape and share stories about collective impact.”

Donna Bartos, executive director of the Purple Ribbon Council (BLOOM), envisions a puppet performance designed for children in pre-school and early grades to align with existing ‘BLOOM” programs in place in several schools and community centers.

“According to the Center for Disease Control, one in three teens report experiencing verbal, emotional or physical abuse in a relationship and 50 percent do not report,” Bartos said.

We want to shift the conversation from high profile cases like (Baltimore Ravens player) Ray Rice to root cause prevention,” Bartos said. “Our mission is to promote healthy relationships and prevent bullying and teen dating violence before it starts.”

ASU senior Samantha Sidoti will work with Bartos and ASU’s School of Theatre and Film at Herberger Institute for Design and The Arts to develop the performance.  Sidoti is a major in Women and Gender Studies with a minor in theatre.

“The project will target young audiences to teach them what classifies a healthy relationship and give them tools to be active bystanders from an early age,” Sidoti said.

Student Shannon Oliver, who is studying Global Health and Gender Studies, also has been assigned to a paid internship with the project and more may be engaged as the program develops. Funding for student stipends and project related costs will come from The Charitable Words Scholars Fund and raised through sponsorships.

Charitable Words was founded by retired journalist Tom Callinan, former Editor of The Arizona Republic and adjunct instructor at ASU’s Cronkite School of Journalism. The part-time Arizona resident serves on BLOOM’s “jump start” board of directors and is a former board member of Social Venture Partners International.

“The idea for the BLOOM project came from a program by nonprofit partnering with SVP Cincinnati, Callinan said,  One of The Family Nurturing Center’s programs is “Kids on The Block,” which brings education to schools about domestic voience, abuse and bullying. The stories are told by puppets, cuddly characters who put harsh realities in gentle terms children can relate to.

“It’s powerful to watch children open to talking of these issues with the puppets – when they likely would not be opening up to adults,” Callinan said. FNC reported that ninety-nine percent of teachers and counselors viewing the performances reported that the program was helpful to children. Eighty percent of children completing tests reported increased knowledge and awareness of child abuse. Thirteen children disclosed personal experiences of abuse.

Since 2012, more than 40 Charitable Words Scholars have been assigned to nonprofits in the Ohio region and nationwide, ranging from small colleges and nonprofits to a current collaboration with Stanford School of Medicine on a video and awareness campaign about the causes or cures for depression, anxiety and post traumatic stress among veterans.

The Purple Ribbon Council was incorporated as a 501c3 nonprofit in 2009 and BLOOM has educated more than 4,000 Maricopa County teens on dating abuse prevention and how to have healthy relationships.

Bartos plans to bring BLOOM programs to a minimum of 15 schools and youth-serving organizations in the 2014-15 school year,

“We understand and embrace that primary prevention will take decades to realize,” she said. “We are in this for the long haul.”