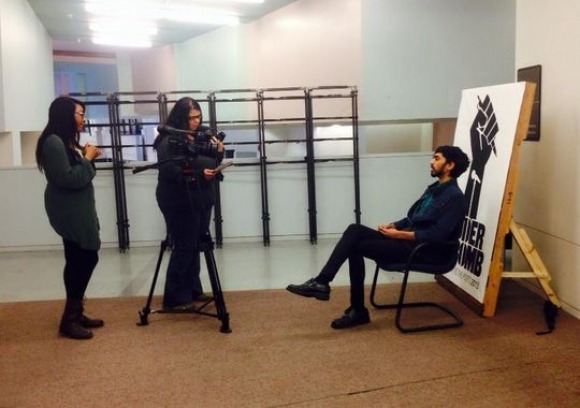 When Cincinnati Enquirer business reporter Sydney Murray called and said she wanted to do a story about Charitable Words, it seemed right to invite one of our nonprofit partners to join the interview.  Wordplay Cincy’s executive director Libby Hunter seemed to be a good fit to talk about the video documentary being produced by Charitable Words Scholars from Northern Kentucky University.  Joining the conversation was advisor Sara Drabik, and NKU College of Informatics instructor.  The story was done well, so we’re sharing it here.  Thank you to The Enquirer for helping Wordplay – and Charitable Words – get this story to wide audience.

The documentary video was premiered at The Mercantile Library December 1.  Here’s a link to the video:

And The Enquirer story:

Founded in 2012, Charitable Words works to partner nonprofits with students who will help these nonprofits get their message out to the world.

The NKU interns are in the process of creating a documentary for Wordplay Cincy.

Wordplay, founded in 2012, is an organization that helps children find their voices through literacy and creative expression.

Wordplay worked with the University of Cincinnati’s Charles Phelps Taft Research Center and Elementz, a youth arts organization, to bring the poetry slam to Cincinnati.

Wordplay and Elementz both helped teams prepare for the competition.

Preparations for the poetry slam began last fall, which is also when the three NKU students began to follow and film the Wordplay students.

The NKU students started going to Wordplay mentoring sessions and open mic nights to get to know the high school students. They interviewed both the young poets and tutors.

“They were just filming constantly it felt like,” said Sara Drabik, NKU assistant professor of electronic media and broadcasting.

Wordplay executive director Libby Hunter said the NKU students tried to hone in on three or four Wordplay students they thought would make it to the end of the competition.

Elementz and Wordplay worked with the high school students all year, leading up to the semifinals in March, and the finals on April 18, which the NKU students also attended.

Both were teams mentored by Wordplay.

Hunter said Robinson, who will be attending UC as a first-generation college student, has a lot of talent and made a name for himself through the slam.

“One of Wordplay’s main goals is to bridge these divides,” Hunter said.

Although school ended in May, the NKU students, Erin Mullins, Taylor Harris and Holland Rains, are still working as Charitable Words interns and working on the documentary. Mullins and Harris even graduated this year.

They hope to have the documentary completed by September.

“I’m proud to say they are still making it a priority,” Drabik said.

Drabik said she and NKU Student Media Advisor Michele Day chose these students because they knew they would get more out of it besides just making a documentary. This was their dream team.

“They just immediately said yes and we were elated because we didn’t really want to go to plan B,” Drabik said.

She said they are aiming for a 30-minute documentary, but don’t have a set length yet. She said they want to show the high school students’ journeys and the journey of her own students.

Charitable Words founder Tom Callinan said the charity is planning to have an event this fall to showcase the documentary.

Hunter said it will be exciting for the high school students to see themselves on the big screen. “Everyone’s equally worthy of success and celebration,” Hunter said.

The poetry slam will start again beginning in September.

Since 2012, more than 70 students have worked with more than 30 nonprofits through Charitable Words. Hunter said Chartible Words helps bring exposure to nonprofits, as well as gives interns meaningful opportunities.

Callinan said Charitable Words is based on the idea that people want purpose in their lives and not just a paycheck.

He said he loves that the interns are changing the world. The film “is professionally done,” he said. “This one was pretty special, I thought.”

Callinan, a former Enquirer editor and vice president, said he didn’t always like being objective because he cares too much.